The Disneyland Resort, commonly known as Disneyland, is an entertainment resort in Anaheim, California. It is owned and operated by The Walt Disney Company through its parks, experiences and products division and is home to two theme parks (Disneyland Park and Disney California Adventure), three hotels, and a shopping, dining, and entertainment complex known as Downtown Disney.

The resort was developed by Walt Disney in the 1950s. When it opened to guests on July 17, 1955, the property consisted of Disneyland, its 100-acre parking lot (which had 15,167 spaces),[1] and the Disneyland Hotel, owned and operated by Disney's business partner Jack Wrather. After the success with the multi-park, multi-hotel business model at Walt Disney World in Lake Buena Vista, Florida, Disney acquired large parcels of land adjacent to Disneyland to apply the same business model in Anaheim.

During the expansion, the property was named the Disneyland Resort to encompass the entire complex, while the original theme park was named Disneyland Park. The company purchased the Disneyland Hotel from the Wrather Company and the Pan Pacific Hotel from the Tokyu Group. The Pan Pacific Hotel became Disney's Paradise Pier Hotel in 2000. In 2001 the property saw the addition of Disney's Grand Californian Hotel & Spa, a second theme park, named Disney California Adventure, and the Downtown Disney shopping, dining, and entertainment area.

Walt Disney's early concepts for an amusement park called for a "Mickey Mouse Park" located adjacent to the Walt Disney Studios in Burbank (presently the site of the West Coast headquarters of ABC). As new ideas emerged, Walt and his brother Roy realized that the Burbank location would be too small for the project, and hired a consultant from Stanford Research Institute to provide them with information on locations and economic feasibility. The consultant recommended a remote location in Anaheim, adjacent to the then-under-construction Santa Ana Freeway. The consultant correctly predicted that the location – covered by orange groves at the time – would become the population center of Southern California. Since the location was far from Southern California population centers in the 1950s, Walt Disney wanted to build a hotel so that Disneyland visitors traveling long distances could stay overnight. However, the park had depleted his financial resources, so he negotiated a deal with Hollywood producer Jack Wrather in which he would build and operate a hotel called the Disneyland Hotel across the street from Disneyland.

Disneyland opened on July 17, 1955, with a televised press preview event on ABC. Despite the disastrous event, later dubbed "Black Sunday", during which several rides broke down and other mishaps occurred, Disneyland became a huge success in its first year of operation. The hotel, which opened three months after the park, enjoyed similar success. Walt Disney wanted to build more facilities for Disneyland visitors to stay in Anaheim, but since his financial resources were drained, entrepreneurs established their own hotels in the area surrounding the park and hotel to capitalize on Disneyland's success.[2]

To Walt Disney's dismay, the city of Anaheim was lax in restricting their construction, eager for the tax revenue generated by more hotels in the city. The area surrounding Disneyland became the atmosphere of colorful lights, flashy neon signs, and then-popular Googie architecture that he wanted to avoid (and which years earlier had caused the city of Burbank to deny his initial request to build his project in Burbank).[3] The Anaheim Convention Center was built across the street from Disneyland's original parking lot, and residences were constructed in the area as part of the city's growth in the late 20th century. Eventually, Disneyland was "boxed in", a factor which would later lead Walt Disney to acquire a significantly larger parcel of land for the construction of Walt Disney World. The Walt Disney Company gradually acquired the land west of the park, notably the Disneyland Hotel in 1989 following Jack Wrather's death in 1984, the Pan Pacific Hotel (now Disney's Paradise Pier Hotel) in 1995, and several properties north of the Disneyland Hotel in the mid to late 1990s.[citation needed]

After Walt's and Roy's deaths in 1966 and 1971, respectively, the Walt Disney Company would go on to achieve success with the multi-park, multi-hotel resort complex business model of Walt Disney World in Florida, which opened in 1971. In the 1990s, Disney decided to turn Disneyland into a similar multi-park, multi-hotel resort destination. In 1991, Disney announced plans to build WestCOT, a theme park based on Walt Disney World's EPCOT Center, on the site of the original Disneyland parking lot.[4] Its estimated cost was US$3 billion, largely due to the cost of land that Disney would need to acquire. With the new Euro Disney Resort, which opened in 1992, becoming a financial and public relations albatross for the company, Disney was unable to finance the project, and cancelled WestCOT in 1995. That summer, Disney executives gathered in Aspen, Colorado for a 3-day retreat, where they came up with the idea for a California-themed park, dubbed Disney's California Adventure Park, to be built on the same site slated for WestCOT. $1.4 billion was budgeted to build the park, a retail district, and hotels.[4]

In August 2015, it was announced that Disneyland Park would receive a 14-acre Star Wars-themed land scheduled to open in 2019.[7] It opened on May 31, 2019. Star Wars: Galaxy's Edge is home of two attractions, Rise of the Resistance and Millennium Falcon: Smuggler's Run.

Disney announced plans to build a fourth hotel at the resort in 2016, slated for an opening in 2021.[10] In August 2018, the hotel was placed on hold indefinitely because of a dispute with the city of Anaheim, which concerned a tax rebate that would have subsidized the hotel's construction.[11][12] Later, the hotel was cancelled as Disney and Anaheim could not come to an agreement on the tax rebate.

In April 2019, Disneyland announced that Mickey & Minnie's Runaway Railway would be coming to Disneyland in 2022. The attraction will go behind Mickey's Toontown in a former backstage area, but much of Toontown will remain the same.[13]

The Disneyland Resort is located several miles south of downtown Anaheim, in an area branded by the city as the Anaheim Resort near the border of neighboring Garden Grove. The resort is generally bounded by Harbor Boulevard to the east, Katella Avenue to the south, Walnut Street to the west and Ball Road to the north. Interstate 5 borders the resort at an angle on the northeastern corner.

Special offramps from Interstate 5 combined with a reversible flyover over the intersection of Ball Road and Disneyland Drive permit access into and out of the Mickey & Friends parking garage during peak morning and evening traffic times. The official address of the resort is 1313 South Harbor Boulevard; the address number is a Hidden Mickey.[14]

a hotel themed after the section of Disney California Adventure it overlooks, which opened in 1984 as the Emerald of Anaheim, later changing its name to the Disneyland Pacific Hotel in 1995 after its acquisition by Disney, and finally opening under its current name and theme on December 15, 2000.

The 2019 issue of "TEA/AECOM 2018 Theme Index and Museum Index: The Global Attractions Attendance Report" reported the following attendance estimates for 2018 compiled by the Themed Entertainment Association:

Admission prices have greatly increased since the gates first opened, due in part to inflation, the continuing construction and renovation of attractions, and the addition of a second theme park, Disney California Adventure. As of 17 January 2020, one-day "Park Hopper" tickets, allowing entry to both Disneyland Park and Disney California Adventure, are priced between $154 (on "Value" days) & $199 (on "Peak" days) for adults, and between $148 ("Value") & $191 ("Peak") for children.[18] Visitors can also purchase one-park tickets and multi-day tickets.

The president of Disneyland Resort is Ken Potrock. Potrock reports to Josh D'Amaro, Chairman of Parks, Experiences and Consumer Products. 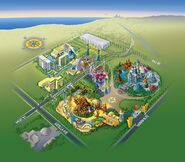 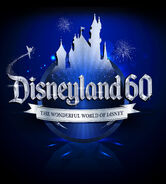