The Walt Disney World Railroad (or WDWRR for short) is a 3 ft (914 mm) narrow gauge heritage railroad and attraction located within the Magic Kingdom theme park of Walt Disney World in Bay Lake, Florida, in the United States. Its route is 1.5 miles (2.4 km) in length and encircles the vast majority of the park, with three train stations in different areas. The rail line, which was built by WED Enterprises, is operated with four historic steam locomotives originally built by Baldwin Locomotive Works. It takes around 20 minutes for each train to complete a round trip on the WDWRR's main line. On a typical day, the railroad will have two trains in operation; and on busy days, the railroad will have three trains in operation.

The WDWRR's development was led by Roger E. Broggie, the same person who oversaw the construction of the Disneyland Railroad in Disneyland in Anaheim, California. The attraction's locomotives were acquired from the Ferrocarriles Unidos de Yucatán, a narrow gauge railroad system in Mexico. After being shipped to the United States, they were altered to resemble locomotives built in the 1880s and restored to operating condition. Each locomotive was also given a set of passenger cars, which were built entirely from scratch.

The Walt Disney World Railroad opened to the public for the first time on October 1, 1971, the same day that the Magic Kingdom park first opened. Since then the WDWRR has become one of the world's most popular steam-powered railroads, with 3.7 million passengers served each year.

The development of the Walt Disney World Railroad from the late 1960s to its opening in 1971 was overseen by Roger E. Broggie, Vice President and General Manager of Mapo, Inc., WED Enterprises' research, and manufacturing branch.[1] Broggie previously supervised the building of the Disneyland Railroad in Disneyland in Anaheim, California. From his experience with the railroad at Disneyland, Broggie determined that the best option in terms of what type of steam locomotives to use would be already-existing ones, as opposed to building them entirely from scratch like the Disneyland Railroad's first two locomotives. To this end, he contacted rail historian Gerald M. Best who informed him of a possible location where these types of locomotives could be obtained.

The location was a scrapyard in Mérida, Yucatán, Mexico, owned by the Ferrocarriles Unidos de Yucatán, a 3 ft (914 mm) narrow gauge system (the same gauge as the Disneyland Railroad). Broggie, along with fellow Disney employee and railroad-building expert Earl Vilmer, ventured down to Mérida in 1969 to investigate. They determined that four locomotives built by Baldwin Locomotive Works in the boneyard, along with a fifth locomotive built by Pittsburgh Locomotive and Car Works in a park in front of the railroad company's headquarters across the street, could potentially be salvaged.

Broggie paid a total of US$32,750 for all five locomotives ($8,000 for each of the four locomotives in the boneyard plus an additional $750 for the fifth locomotive in the park). The locomotives, along with an assortment of brass fittings and other spare parts are given away for free, were immediately shipped by rail around the Gulf of Mexico back to the United States.

The five locomotives and spare parts acquired by Roger Broggie, in order to receive the aesthetic and mechanical restorations necessary to run on the planned Walt Disney World Railroad (WDWRR), were sent to the Tampa Ship Repair & Dry Dock Company in Tampa, Florida. At the time, this was the closest facility to the Walt Disney World site in Bay Lake, Florida, with the space and equipment needed to accommodate full-size railroad rolling stock. Here, Transportation Superintendent Earl Vilmer, who had accompanied Broggie on his trip to Mexico, along with Project Engineer Bob Harpur and the facility's Machinist Supervisor George Britton, were tasked with the project's completion.

The general idea for the restoration was to make the locomotives appear as if they were built in the 1880s. The original, dilapidated boilers of the four locomotives built by Baldwin Locomotive Works were replaced by brand-new, smaller boilers built by Dixon Boiler Works. Their worn-out wood and steel cabs were replaced with new fiberglass cabs, and they were given new tenders, which utilized the bogies from the original tenders. Many of the smaller original parts on the locomotives such as the domes and brass bells on top of the boilers, as well as the wheels and side rods, were successfully refurbished and included in the finished products. The locomotives' fireboxes were also reconfigured to burn diesel oil for fuel to generate steam. Replicas of their builder plates were also made to replace the worn-out originals.

The restoration of the Walt Disney World Railroad's four locomotives, as well as the construction of five new open-air Narragansett-style excursion cars for each of them (twenty in total), was completed in less than two years. The first completed set of five passenger cars was delivered to the Magic Kingdom park in April 1971 and the first completed locomotive arrived on May 15, 1971, several months before the park's opening. Like the steam trains running on the Disneyland Railroad during Disneyland's opening day on July 17, 1955, the steam trains for the WDWRR were the first attraction in the Magic Kingdom park to be finished, and they have been operating in the park ever since it first opened on October 1, 1971. George Britton, who was instrumental in getting the WDWRR's locomotives refurbished, became the railroad's foreman, and he held that occupation from the time the railroad opened until his retirement on April 6, 2006. The WDWRR would eventually become one of the most popular steam-powered railroads in the world with 3.7 million passengers served each year.

There are four different trains used on the railroad and are named after people who were important to this railroad or to the Walt Disney Company.

This locomotive is named after Walt Disney, who founded the Walt Disney Company and loved trains. It is the tallest locomotive in the WDWRR fleet at 11 feet 11 inches (3.63 m), giving it 1 inch (0.025 m) of clearance between the top of its smokestack and the top of the roundhouse doors. Currently inoperable and under refurbishment at the Strasburg Rail Road in Strasburg, Pennsylvania.

The Lilly Belle is named after Walt Disney's wife, Lillian Disney. It shares the name of the locomotive that ran in Walt's backyard miniature railroad. Due to mechanical problems, this locomotive has been retired from passenger service and was used exclusively for the daily park opening ceremonies since 2004.

In August 2010, the WDWRR's No. 2 locomotive was shipped-off to the Strasburg Rail Road in Strasburg, Pennsylvania for an extensive refurbishment. On July 21, 2016, it returned to the Magic Kingdom and came back to service on November 23 that year.

This locomotive was named after Roger E. Broggie, who led the effort of acquiring the locomotives for the Walt Disney World Railroad. He also helped Walt Disney build the Carolwood Pacific railroad and the EPCOT model.

Originally planned to be named after Roy O. Disney, but given that he did not want his name attached to the locomotive nearly identical to the No. 1 named after Walt Disney, the No. 4 was named after him instead.

This locomotive is named after Walt's older brother Roy O. Disney. Roy saw the completion of the Magic Kingdom after his brother's death and named the resort Walt Disney World. The locomotive's entry into service on the WDWRR was delayed until two months after the park opened due to the need for repairs to a crack in its frame.

In the 1980s, the locomotive was given a new whistle originally used by the Admiral Joe Fowler Riverboat, which was dropped from the crane attempting to lift it into the dry dock area for refurbishment and its hull was completely destroyed beyond repair. The locomotive has another similar whistle to the Admiral Joe Fowler, which has now remained on the Liberty Belle Riverboat. For decades, the Joe Fowler's whistle (on the Roy) sounded extremely rapsy and low-pitched due to one of its chambers clogged up. It wasn't until summer 2015 when the cast members unclogged the chambers to return the whistle's actual original sound.

Located at the entrance of the park, Main Street Station is the first sight many see as they enter the Magic Kingdom. Every morning an opening ceremony is done here where the Lilly Belle arrives with Mickey Mouse, a family, and some other disney characters and open the park.

Frontierland Station is located above the entrance to Splash Mountain and next to Big Thunder Mountain Railroad. As trains enter the station it is possible to see the final scene of Splash Mountain. 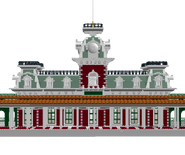