In 1959, the Walt Disney Company, under the leadership of Walt Disney, began looking for land for a second resort to supplementing Disneyland, which had opened in Anaheim, California in 1955. Market surveys revealed that only 2% of Disneyland's visitors came from east of the Mississippi River, where 75% of the population of the United States lived. Additionally, Walt Disney disliked the businesses that had sprung up around Disneyland and wanted control of a much larger area of land for the new project.

Walt Disney first flew over the Orlando site (one of many) on November 22, 1963, the day John F. Kennedy was assassinated. He first flew over and appealed to the Sanford, Florida city council to allow him to build Disney World in Sanford, but his appeal was declined. The citizens of Sanford did not want the crime that was sure to come with tourism. He saw the well-developed network of roads, including Interstate 4 and Florida's Turnpike, with McCoy Air Force Base (later Orlando International Airport) to the east, and immediately fell in love with the site. When later asked why he chose it, he said, "the freeway routes, they bisect here." Walt Disney focused most of his attention on the "Florida Project", both before and after his participation at the 1964-1965 New York World's Fair, but he died on December 15, 1966, five years before his vision was realized.

To avoid a burst of land speculation, Disney used various dummy corporations and cooperative individuals to acquire 27,400 acres (110 km², 43 mi²) of land. The first five-acre (20,000 m², 217400 ft²) lot was bought on October 23, 1964, by the Ayefour Corporation (a pun on Interstate 4). Another dummy corporation name which land was bought under was RETLAW which spelled backward is WALTER. Others were also used with a second or secret meanings which add to the lore of the Florida Project, including M.T. Lott Real Estate Investments (pronounced empty lot).

In May 1965, major land transactions were recorded a few miles southwest of Orlando in Osceola County. Two large tracts totaling $1.5 million were sold, and smaller tracts of flatlands and cattle pastures were purchased by exotic-sounding companies such as the Latin-American Development and Management Corporation and the Reedy Creek Ranch Corporation. In addition to three huge parcels of land were many smaller parcels, referred to as "outs."

Much of the land had been platted into five-acre (20,000 m², 217400 ft²) lots in 1912 by the Munger Land Company and sold to investors. In most cases, the owners were happy to get rid of the land, which was mostly swampland. Yet another problem was the mineral rights to the land, owned by Tufts University. Without the transfer of these rights, Tufts could come in at any time and demand the removal of buildings to obtain minerals.

After most of the land had been bought, the truth of the property's owner was leaked to the Orlando Sentinel on October 20, 1965. A press conference soon was organized for November 15. At the presentation, Walt Disney explained the plans for the site, including EPCOT, the Experimental Prototype Community of Tomorrow, which was to be a futuristic city (and which was also known as Progress City). Plans for EPCOT would drastically change after Disney's death. EPCOT became EPCOT Center, the resort's second theme park, which opened in 1982. Concepts from the original idea of EPCOT would be integrated into the community of Celebration much later.

The Reedy Creek Drainage District was incorporated on May 13, 1966 under Florida State Statutes Chapter 298, which gives powers including eminent domain to special Drainage Districts. To create the District, only the support of the landowners within was required.

Walt Disney died on December 15, 1966, before his vision was realized. His brother and business partner, Roy O. Disney, postponed his retirement to oversee construction of the resort's first phase.

On February 2, 1967, Roy O. Disney held a press conference at the Park Theatres in Winter Park, Florida. The role of EPCOT was emphasized in the film that was played, the last one recorded by Walt Disney before his death. After the film, it was explained that for Walt Disney World to succeed, a special district would have to be formed: the Reedy Creek Improvement District with two cities inside it, the City of Bay Lake and the City of Reedy Creek (now the City of Lake Buena Vista). In addition to the standard powers of an incorporated city, which include the issuance of tax-free bonds, the district would have immunity from any current or future county or state land-use laws. The only areas where the district had to submit to the county and state would be property taxes and elevator inspections.

The legislation forming the district and the two cities was signed into law on May 12, 1967. The Florida Supreme Court ruled in 1968 that the district was allowed to issue tax-exempt bonds for public projects within the district despite the sole beneficiary being The Walt Disney Company.

Construction of drainage canals was soon begun by the district, and Disney built the first roads and the Magic Kingdom. Disney's Contemporary Resort, Disney's Polynesian Resort, and Disney's Fort Wilderness Resort & Campground were also completed in time for the park's opening on October 1, 1971. The Palm and Magnolia golf courses near the Magic Kingdom had opened a few weeks before.

Disney subsequently opened EPCOT Center in 1982, a theme park adapted from Walt Disney's vision for a "community of tomorrow". The park permanently adopted the name Epcot in 1996. In 1989, the resort added Disney-MGM Studios, a theme park inspired by show business, whose name was changed to Disney's Hollywood Studios in 2008. The resort's fourth theme park, Disney's Animal Kingdom, opened in 1998.

Meg Crofton was named a president of the resort in August 2006, replacing Al Weiss, who had overseen the site since 1994.

Despite marketing claims and popular misconceptions, the Florida resort is not located in Orlando. The entire property is outside Orlando's city limits; the majority sits within southwestern Orange County with the remainder in adjacent Osceola County to the south. Most of the resort's land and all of the public areas are located in the cities of Bay Lake and Lake Buena Vista, about 15 miles (24 km) southwest of Orlando.

At its peak, the resort occupied approximately or 47 square miles (120 km²), about the size of San Francisco, or twice the size of Manhattan. Portions of the property since have been sold or de-annexed, including land now occupied by the Disney-built community of Celebration.

Disney Springs underwent a significant refurbishment and now consists of four major sections, Marketplace, The Landing, Town Centre and West Side, that contain many shopping, dining, and entertainment venues. They include the DisneyQuest indoor arcade, a House of Blues restaurant and nightclub, a Planet Hollywood restaurant and a Cirque du Soleil theater and original production, La Nouba.

The resort has a small aircraft runway located east of the Magic Kingdom parking lot. When the resort opened in 1971, Shawnee Airlines began regular passenger service from Orlando's McCoy Air Force Base (now Orlando International Airport) directly to Disney World's STOLport (Short Take Off and Landing) on a daily basis, with flights lasting only a few minutes. Today, the runway mostly is used as a staging area for buses and no longer is in service for aircraft.

Catch-and-release fishing excursions are offered daily on the resort's lakes. A Florida fishing license is not required because it occurs on private property. Cane-pole fishing is offered from the docks at Disney's Fort Wilderness Resort & Campground and Disney's Port Orleans Resort.

Guests arriving at Orlando International Airport can be transported to their Disney resort from the airport using Disney's Magical Express service, and have their bags picked up and transported for them through a contract with BAGS Incorporated. Guests board custom motor coaches, watch a video about the Walt Disney World Resort, and their luggage is later delivered directly to their rooms.

The May 2008 issue of trade magazine Park World reported the following attendance estimates for 2007 compiled by Economic Research Associates in partnership with TEA (formerly the Themed Entertainment Association):

When the Magic Kingdom opened in 1971, the site employed about 5,500 "cast members". Today it employs more than 61,000, spending more than $1.1 billion on payroll and $478 million on benefits each year. The largest single-site employer in the United States , Walt Disney World Resort has more than 3,000 job classifications.

In a March 30, 2004, article in The Orlando Sentinel, then-Walt Disney World president Al Weiss gave some insight into how the parks are maintained:

There is a fleet of Disney-operated buses on property, branded Disney Transport, that is available for guests at no charge. In 2007, Disney Transport started the guest services upgrade to the buses. SatellGPS systems controlling new public addresses systems on the buses give safety information, park tips and other general announcements with music. They are not to be confused with the Disney Cruise Line and Disney's Magical Express buses which are operated by Mears Transportation. Taxi boats link some locations.

During the resort's early planning stages, Walt Disney referred to the project as Project X, The Florida Project, Disney World, and The Disney World. Early visual references used the same medieval font as Disneyland. Walt Disney was very involved in the site selection and project planning in the years before his death. The secretive names were chosen because of the high confidentiality of the project during the initial planning.

After Walt Disney's death, Roy O. Disney added the name Walt Disney to Disney World as a permanent tribute to his brother. The resort's original logo was an oversized "D" with a Mickey Mouse-shaped globe containing latitude and longitude lines, with the property's name presented in a modern, sans-serif font.

Walt Disney World Resort retired its original font and symbol during its 25th-anniversary celebration in 1996-97. The old "D" symbol still can be found in many places, however, including the front car of each monorail, manhole covers, select merchandise items and flags flown at several sites across the property. 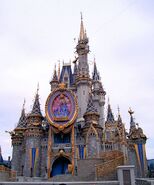